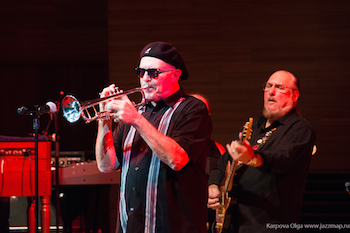 A native of Texas, trumpeter Steve Howard moved to New Orleans in the early 1970’s. There he was discovered by record producer/songwriter Allen Toussaint, who hired Steve to be his lead trumpet player at the legendary Sea-Saint Studio. While at Sea-Saint Steve played on Touissaint’s “Southern Nights” album and Patti LaBelle’s “Nightbirds” album, which included the classic “Lady Marmalade.”

In 1975 Paul McCartney came to New Orleans to record the Wings album “Venus and Mars.” Steve was called to play on McCartney’s “Call Me Back Again.” Several months later when McCartney was assembling his band for the Wings world tour, horn arranger Tony Dorsey called Steve to join the Wings horn section.

Steve went on to record on “Wings at the Speed of Sound,” Wings Over America,” “Back to the Egg,”and Rockestra.” He toured with Wings from 1975-1980 and appeared in all of the Wings films and videos.

During his career Steve has also performed and recorded with Dr. John, Albert Collins, Edgar Winter, Ray Charles, Junior Wells, Clarence “Gatemouth” Brown, and Delbert McClinton, as well as many others. He currently tours with Steve Cropper and “Blue” Lou Marini in the Original Blues Brothers Band,