Your Are Here:  Home Events The Split Squad featuring Clem Burke from Blondie! Plus Sebastian and The Poor Valley Marauders 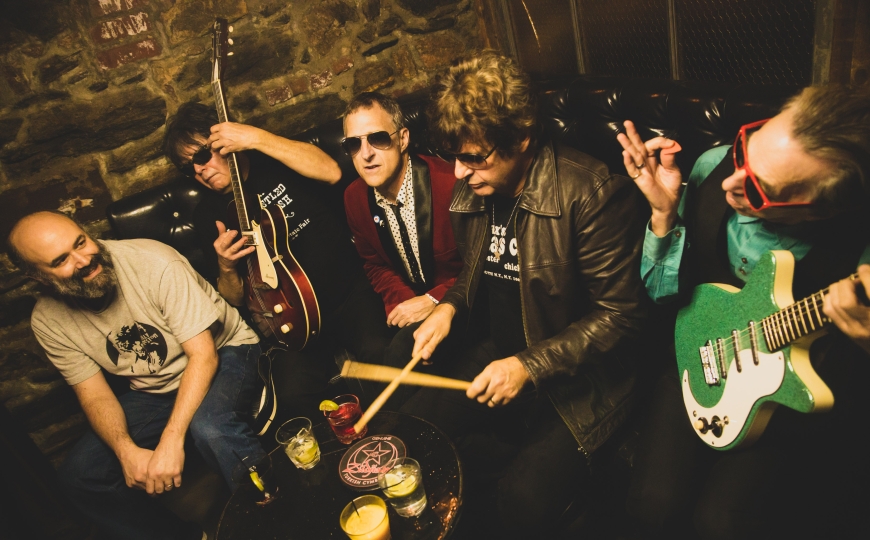 Delighted to welcome back to the Cavern our good friend Clem Burke along with his band, Split Squad. Sharing the bill are the fantastic Liverpool based band, Sebastian and The Poor Valley Marauders.

This is the story of five men who’ve been there and done that – from the Bowery to the Arctic Circle, from countless dive bars to one of the landmarks of baseball – and when they had done it all, well, they went out and did it again. And again after that. And when they finally stopped to catch their breaths, they saw each other and said let’s get together … and do it again!

The Split Squad, founded in 2011, is one of the finest all-star teams you might never have heard before. They don’t get together too often, as, hey, they have these other gigs, too. But when they do unite, watch out! Five fingers of a closed fist.

So who are these bare-knuckled stars of the musical ring, anyway? Let’s go to their corner:

Eddie Munoz: Eddie might be best known as the lead guitarist of ‘80s L.A. legends The Plimsouls (and he keeps the name alive by touring occasionally), but as he shows here, any attempts to pigeonhole him with terminology such as power pop or new wave pop are ultimately futile.

Keith Streng: One of the four handsomest guys in rock’n’roll, an uncrowned king of pop and soul, Keith and his glitter boots have trod on stages all over the globe the past four and a half decades as the guitarist and co-founder of one of the most enduring bands of all, The Fleshtones – who outlasted punk, new wave and many of their garage contemporaries, and have never, ever become a nostalgia act. These days, he also can be found recording with other acts, from Radio Birdman legend Deniz Tek to Swedish garage fiends Stupidity, Strengsbrew and The Vacuum Cleaners.

Clem Burke: The band’s resident legend. The Rock and Roll Hall of Fame drummer, and Blondie founding member, is still bashing away with the same passion, fury and timing he’s had since before he first walked into a Blondie rehearsal session. Constantly moving and always playing, Clem is still highly in demand as a session musician, having worked in the past with Pete Townshend, Bob Dylan, & The Eurythmics, and more recently with The Tearaways, The Rockats, and Echo & The Bunnymen.

Michael Giblin: Working from his laboratory deep in the center of Pennsylvania, Mr. Giblin, the well-dressed bass player, singer, keyboardist, producer and connoisseur of fine cuisine, is the glue that keeps the band together and the fuel that keeps it moving ahead. A member of ‘90s power-popsters Cherry Twister, he assembled The Split Squad after his current band, Parallax Project, encountered the other band members on various tours and recording projects. Michael has recently seen his stock rise as a producer and engineer, having his hand on new releases from The Fleshtones, The Cynz, and Stupidity.

Josh Kantor: How many people in the biz can say they played with four Rock and Roll Hall-of-Famers (Clem, Peter Buck and Mike Mills of R.E.M. and John Paul Jones of Led Zeppelin) and at least one future Baseball Hall-of-Famer (and maybe more)? When not playing with The Split Squad or The Baseball Project, Josh is the longtime organist extraordinaire for the Red Sox. Yes, those Red Sox, the ones up in Boston. From his perch at Fenway, Josh dishes out arguably the wildest array of songs in the history of the game, many by request, and has been on board for two World Series titles.

If that’s not enough of a punch, their latest album, Another Cinderella also features an all-star cast of guests, including Jason Victor (The Dream Syndicate), Brian Hurd (Daddy Long Legs), David Minehan (The Neighborhoods/Aerosmith/The Replacements), Scott McCaughey (R.E.M./The Baseball Project/The Young Fresh Fellows), Joe Adragna (The Junior League) and violinist Deni Bonet. Because they know a hit when they see or hear it.

Sebastian and The Poor Valley Marauders

Lead by local legendary singer/songwriter Mark Sebastian D’Lacey, this exciting new outfit pulls on Mark’s influences ranging from early American mountain music to 60’s Laurel Canyon, blues, jazz, gospel and soul, as well as Dylan, Cohen and Waits. An incredible ensemble of musicians from New York, Norway and Liverpool, combine to bring you a superb show with fantastic original material that will stay in your heart for a very long time.