Your Are Here:  Home Cavern News CELEBRATE 60 YEARS OF THE CAVERN! 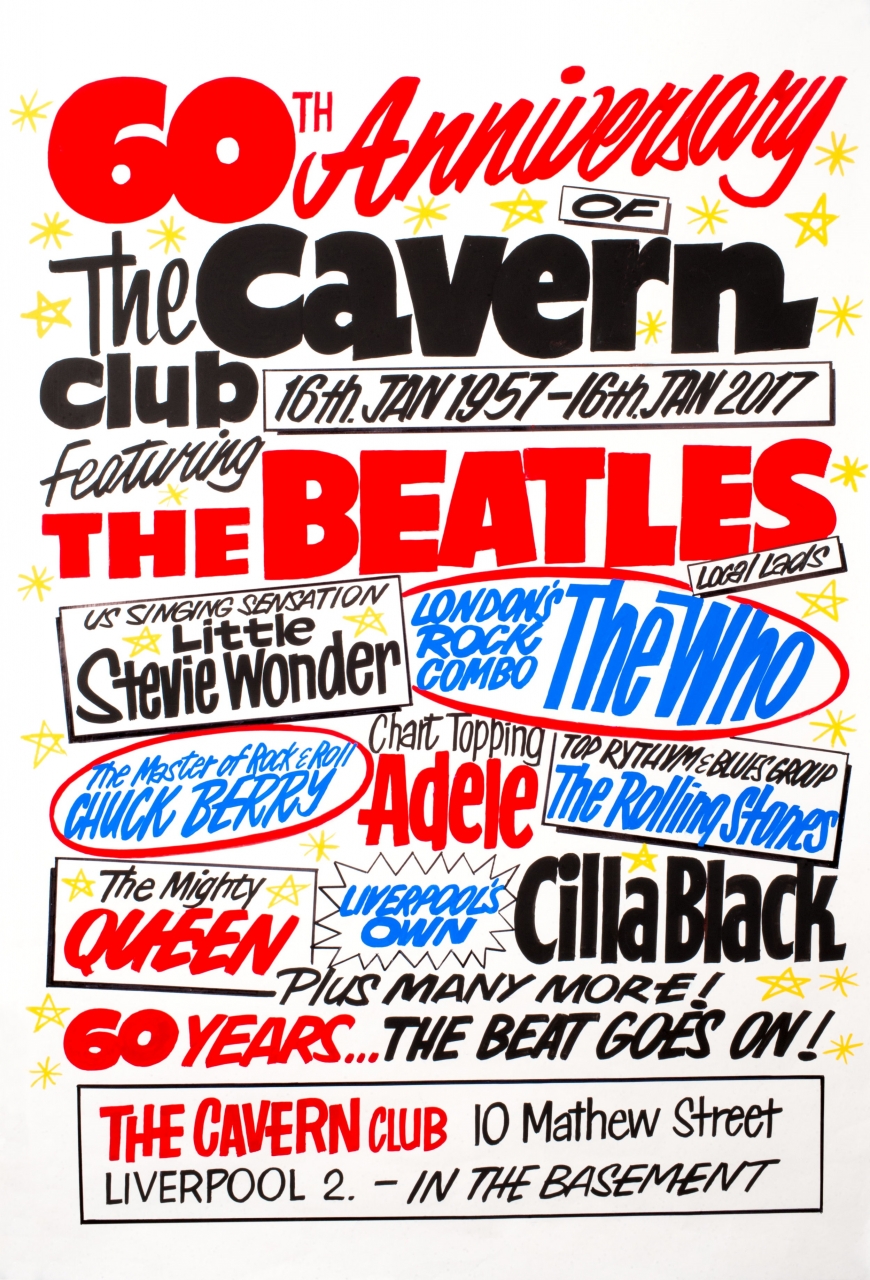 CELEBRATE 60 YEARS OF THE CAVERN!

January 16th, 2017 marked the Cavern’s 60th anniversary and the celebrations will continue all year long!

The Cavern ethos has very much been about the Past, Present and Future. Our upcoming events celebrate the history of the Cavern with brilliant tributes to the past while also giving an opportunity for new artists to exhibit their music.

History of the Cavern Show

Various dates through the year. Click here for availability.

The Cavern Club opened its doors in 1957 as a jazz club and now stands as ‘The Most Famous Club In The World”. Undoubtedly, without the 292 gigs The Beatles played here between February 1961 and August 1963, the Cavern’s story would be a very different one. But they did play those 292 gigs and the Cavern was firmly on the world’s  musical map. From this period, other artists exploded on to the musical scene; Gerry & the Pacemakers, The Searchers, The Hollies, Billy J Kramer, Cilla Black and many more. Everyone wanted to play this iconic venue, and they did; Rolling Stones, The Who, The Kinks, Elton John, Stevie Wonder, Ben E King, Rod Stewart, Status Quo, Chuck Berry, Bo Diddley, Queen and many more. The Cavern has always reflected the current musical trends, embracing along the way, Blues, Soul, Rock, Indie. A true music venue.

Today the Cavern is a thriving live music venue, still attracting the big names. Artists to have played here in recent years include; Oasis, Travis, Arctic Monkeys, Adele, Jessie J, Jake Bugg and of course, in 1999, the return of Sir Paul McCartney.

This specially commissioned show is presented by Cavern resident artist, Tony Skeggs, and his fantastic band and will take you on a musical history tour of the most famous club in the world. Tony was a founding member of THE OVERTURES, the U.K’s premiere 60’s band. A very special annual show from one of the originals at the Cavern Club. Following the incredible success of their 30th Anniversary ‘Steeltown’ Tour, BIG COUNTRY now celebrate the 30thAnniversary of the album that followed that release – ‘The Seer’. Martin Stephenson has been one of the uk’s best-loved musicians for 30 years. Always popular on the circuit, Stephenson’s “must see” live performances are an exuberant tour-de-force combining heart-in-your-mouth intimacy with playful humour and warm self-deprecation.

The Daintees’ critically acclaimed 1986 debut BOAT TO BOLIVIA opened up an always interesting story. It showcased Stephenson’s songwriting, poetic romanticism and spiritual depth – so marking him out as a soulful cream of the leftfield crop during the self-obsessed 1980s. FORMER MEMBERS OF THE LEGENDARY BAND ‘THE KINKS’, BACK TOGETHER PLAYING GREAT MUSIC AND RE-LIVING THE GOOD TIMES WHILST KEEPING THE SONGS ALIVE THAT MADE THE KINKS A HOUSEHOLD NAME.

Expect all the hits: You Really Got Me, Dedicated Follower of Fashion, Sunny Afternoon, Lola, Days, Waterloo Sunset, Come Dancing, and many more for a great night out.  Not to be missed!

“A full house, and a standing ovation.  To anyone wondering about going, do not hesitate” (The Stables, Milton Keynes)

“Nothing short of superb.  From start to finish it was filled with hit after hit” (Mad Ferret, Preston)

CHINA CRISIS WHOSE DISTINCTIVE AOR-FUELLED POP SONGS CHARTED IN THE 80S WHEN THEY SPENT A TOTAL OF 92 WEEKS IN THE CHARTS. WHO SAID THE EIGHTIES WERE ALL BAD?

We’re always excited to have these guys back!