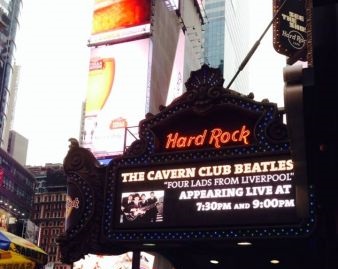 So yesterday’s show at Hard Rock was a biggie for our four lads from Liverpool who topped the bill. Performing the same set that the Beatles performed on the Ed Sullivan show on this day way back in 1964, the Cavern Club Beatles rocked the roof off the packed out house.

The day started at Fest for Beatle fans where the Cavern Club Beatles appeared as a ‘stunt’ all suited and booted and went down a storm. They also met Gerorge Harrison’s first wife Patti Boyd. That was an incredibly surreal moment for them, especially when they ended up having breakfast with her on Sunday morning!

The evening show was performed at The Hard Rock Cafe on Times Square, which is housed in the old Paramount Theatre where the Beatles played a benefit show on their last gig of their US tour later on in 1964.

They gave the sound engineer a run for his money as they had the place bouncing. The lads were also joined by a surprise guest…Ringer Starr who is an absolute dead ringer for Ringo, you’d be forgiven for thinking he was the real deal!

This event was preceded by a fabulously attended Liverpool Reception, which was also at The Hard Rock Cafe. There were lots of people there from The British embassy in NY, along with our own Liverpool contingent and Julia Baird who did a book signing and not to mention the ‘Industry’ people and media it was quite a circus!

The Cavern Club Beatles also got to hang out with Andy Babiuk the author of ‘Beatles Gear’, the bible on all the equipment the Beatles used. Being the Beatle geeks and consummate professional musicians that the lads are, this was manna from heaven! Andy stayed to watch the lads perform and loved it.

From The Hard Rock Cafe everyone moved on to Hurley’s Irish bar which resulted in most people getting to bed (or in some cases a shower) around 04:30am and of course meant for very sore heads on Monday morning! (See photographic evidence of a rather rough looking lot waiting at the airport). We’re thinking of running a competition to see who can guess who was the most drunk?…answers on a postcard to this address!

And onwards the gang goes, leaving NYC today having represented the City of Liverpool to the max. They head to Florida today for a number of 50th Anniversary concerts, including a concert on Daytona Beach on Friday 14th February – this gig also celebrates the twinning of the Cavern Club with the Ocean Deck Beach Bar – both venues established in 1957, also the year Lennon & McCartney met for the first time.

Other tour plans include performing a show for Miami at The Hard Rock Café on February 16th to commemorate the Beatles second appearance on the Ed Sullivan show 50 years ago.

It’s not just NY that have been having all the fun though, on this side of the pond a team from Liverpool including Cavern City Tours, Beatles Story, Hard Days Night Hotel and Marketing Liverpool hosted a dinner in London for some of the UK’s top travel trade and international press representatives.  The venue was a restaurant in Savile Row, close to the former Apple Corps Headquarters at 3 Savile Row, where much of the Let It Be album was recorded and on 30 January 1969 the celebrated rooftop performance was held.

Cavern City Tours Director Dave Jones talked about the events being held in the USA for the 50th anniversary events of the British Invasion and the amazing media coverage which is already generated enquiries from people who want to visit Liverpool.  He also talked about Liverpool’s fantastic Beatles attractions, including the Cavern Club and Magical Mystery Tour.  All the guests were invited to visit Liverpool to experience the city for themselves and we’re looking forward to working with them all to promote the city to visitors in the future.  Guests included representatives from the Foreign Press Association,  New York Times and LA Times plus tour operators Kuoni, Globus, Evan Evans and Flight Centre.

A huge ‘thank you’ and congratulations to all of the Liverpool contingent including The Lord Mayor Gary Millar, deputy mayor Wendy Simon and representatives of Visit Britain and Visit Liverpool among many others who did a sterling job of showcasing the city of Liverpool in New York these last few days.

The USA tour continues until next Tuesday but we look forward to hearing all about the rest of their trip on their return to the UK. Thanks for checking in with us daily.