Your Are Here:  Home Cavern News Unique Beatles recording emerges after 50 years, gets first play in The Cavern 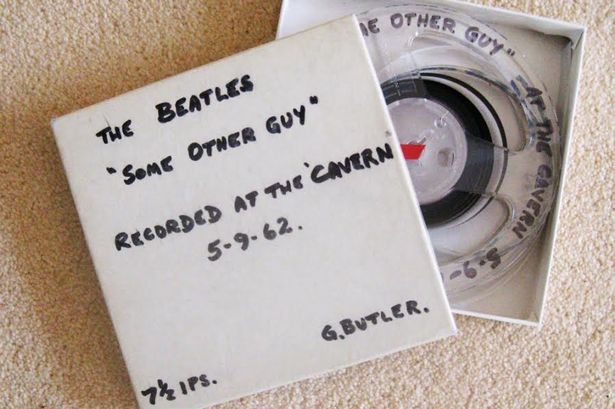 Unique Beatles recording emerges after 50 years, gets first play in The Cavern

Unique Beatles Recording Emerges After 50 Years In A Desk Drawer

An original recording of The Beatles singing “Some Other Guy” at The Cavern in 1962 that was discovered in a desk drawer is to go under the hammer at Adam Partridge Auctioneers in Liverpool.

On August 22nd 1962, The Beatles were filmed by a Granada Television crew at the Cavern, performing “Some Other Guy” and “Kansas City” to be used on a programme called Know The North. However, the sound quality was so poor that it was unable to be broadcast. Sound engineer Gordon Butler returned to the Cavern on the 5th September (after the group had travelled back up to Liverpool having been recording in Abbey Road) with the intention of obtaining a better quality recording to dub over the original. Butler took 3 microphones, 2 of which he individually placed on Lennon and McCartney, and the recording that he made of “Some Other Guy” was so good that the band’s manager Brian Epstein asked Butler to make 5 acetate copies of the tape that he could use to promote the band.

Butler returned to Granada with the tape and gave it to legendary producer Johnnie Hamp. However, due to legal issues with other musicians due to appear on Know The North, the programme was never shown and the tape remained in Hamp’s desk drawer for 50 years. He recently discovered it, and with the help of Beatles historian Paul Wilde, listened to it on a reel-to-reel tape machine and found that it was crystal clear even after all of these years.

The whereabouts of four of the acetate copies are unknown, but acetate records do not have particularly good sound quality, especially after being played a few times. The fifth acetate was sold at auction in 1993 for £16,500 to Apple Records, the record label set up by The Beatles in 1968.

Johnnie Hamp worked at Granada for 35 years, rising to Head of Light Entertainment, and was the producer responsible for television shows such as The Comedians, Scene at 6.30, and The Music of Lennon and McCartney (which Paul McCartney later stated the band only appeared on because “Johnnie was a mate”). He was also responsible for the first major television appearances of acts such as Woody Allen, Paul Daniels, Eric Clapton, Lisa Stansfield, and of course The Beatles.

The tape will be sold at Adam Partridge Liverpool’s next specialist Rock & Pop Memorabilia auction on 4th November and Johnnie Hamp will be donating all of the proceeds to charity.

Johnnie Hamp and Adam Partridge will together be holding a press launch where the tape will be played in public for the very first time. Aptly taking place in the Cavern Club in Liverpool, the tape will be played with the help of Beatles historian Paul Wilde. The launch will take place at 12pm on the 8th October (the day before what would have been John Lennon’s 75th birthday) to an invited press audience.

Accredited members of the press who would like to attend the invited launch on 8th October at 12pm should contact Oliver Hancock: [email protected].