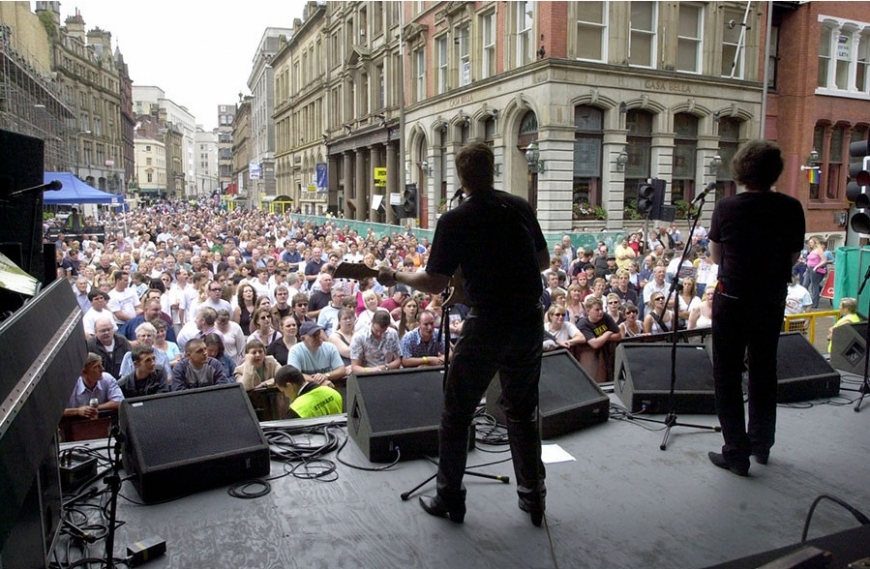 LOS ANGELES, CA – Devolver Digital Films is proud to announce the digital VOD release of The Beatles tribute documentary, Come Together. Directed by Steve Ison and John Scofield, Come Together features performances by ten of an estimated 8,000 international Beatles tribute bands keeping the legacy of The Fab Four alive around the world. Come Together was filmed primarily in and around Liverpool, the birthplace of The Beatles – including the world famous Cavern Club where they were discovered – during International Beatleweek, five decades after the band was formed in 1960. Julia Baird, the sister of John Lennon, narrated the film. In addition to entertaining viewers, Come Together demonstrates the impact of The Beatles on global culture. The film’s digital VOD release is scheduled for February 3, 2015 via iTunes, Amazon Instant Video HD, PlayStation, Xbox, VUDU, Vimeo on Demand, VHX, Gumroad, Google Play, YouTube Rentals, and others. For additional information, please visit www.cometogethermovie.com.

“The idea for the documentary came when I went to Liverpool several years ago with a friend who performed as John Lennon in one of the featured tribute bands. I had never seen anything like it! 300,000 people, like me, with the same connection… the music of The Beatles,” says Steve Ison, who co-directed the film. “The quality and diversity of the bands was unbelievable. We had to share this story with others.”

If music is the universal language, then The Beatles’ discography is its Rosetta Stone. The band’s song compositions are an international language – crossing borders and overriding cultural differences. Though no longer existing as The Fab Four, the band’s musical legacy lives on through generations of fans and the thousands of tribute groups that “come together” worldwide to interpret and celebrate Beatles music. An estimated 8,000 Beatles tribute bands perform globally at festivals and conventions.Filmed in Liverpool during International Beatleweek, Europe’s largest music festival that draws fans and bands from all corners of the globe, Come Together is a tribute to The Beatles’ legacy, a phenomenon that shows no signs of stopping. The lengths that some tribute groups go to honor The Beatles range from simple vocal harmonies to groups affectionately called “boots and suits” bands. Regardless of nationality, they attempt to look and sound as close to John, George, Paul, and Ringo as possible. The result is a creative composite of musical expression – Come Together documents the diversification among the tributes, in sound and illusion.

The groundbreaking documentary film, moderated by John Lennon’s sister, captures the spirit, motivation, energy, and interpretation of The Beatles’ legacy through rare footage, stunning tribute concert performances, in-depth interviews, and personal stories by bands and fans alike. Festival participants in the film have come together, from Tokyo to Stockholm to Las Vegas, in order to share their love of The Beatles’ music as well as the uplifting message it brings. The film is a tribute to this community as well.

After years of negotiations, Sony/ATV Music Publishing gave the filmmakers unprecedented permission to use more than 65 Beatles songs in the film. This is the first time any independent production of this nature has been granted license for this many Lennon/McCartney compositions.

“I was more than pleasantly surprised by how Come Together captured the spirit and dedication of the bands that we continue to bring in each year for our event,” says Bill Heckle, Executive Director of International Beatleweek and Co-Owner of Liverpool’s Cavern Club.

“Both fans and bands alike will love the documentary.”