Your Are Here:  Home Cavern News I saw them standing there 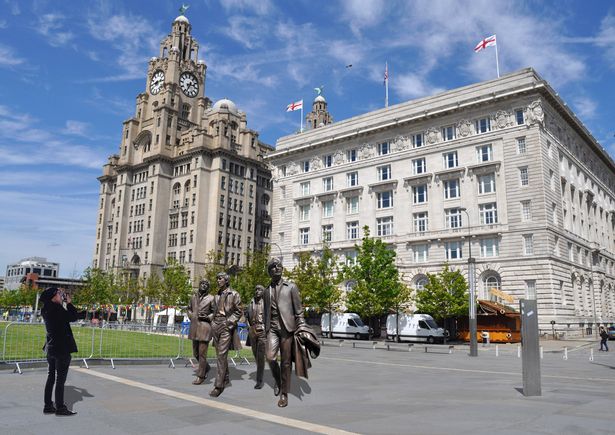 I saw them standing there

On Friday 4 December a brand new statue of the Beatles will be unveiled in front of the Cunard Building depicting the Fab Four walking along the waterfront.

The sculpture has been kindly gifted to the city by the legendary Cavern Club, the venue where The Beatles were discovered. The team at the Cavern wanted to acknowledge how synonymous the band is with the city, and the new addition to the waterfront will undoubtedly prove to be a must-visit location for fans across the world.

The bronze statue which weighs in at 1.2tonnes will be unveiled by Julia Baird (John Lennon’s sister) and Deputy Mayor of Liverpool Councillor Ann O’Byrne.

Julia said: “I am honoured to be unveiling this statue in our wonderful city of Liverpool.

“It stands in loving memory of the best band in the world; the band that leapt from the Cavern stage to world-wide recognition.

“The timing reflects the 50 years since The Beatles final public appearance in Liverpool, at The Empire on the 5 December 1965. I was present at that event and am proud to be at the unveiling.”

On behalf of the Cavern Club, Director Bill Heckle said: “It has been an unbelievable experience to witness the transformation of this city since Cavern City Tours were founded in 1983. Liverpool then, bears little or no resemblance to the forward thinking vibrant and world class city that now stands before us.

“It is undeniable that tourism has been an integral and driving factor in the renaissance of Liverpool and its most famous four sons have played a pivotal role in bringing people here. We are proud that we have been able to finance this project on behalf of fans from all over the world.”

Councillor O’Byrne said: “I am delighted to see the Fab Four take pride of place on the UNESCO World Heritage Site.

“Talk to anyone in or outside the city about our history and you can guarantee The Beatles will get a mention, so it feels right that this sculpture of these iconic men stands proudly on our iconic waterfront.

“I’d like to thank those involved in presenting this special gift to the city, especially the team at the Cavern Club who know all too well the legacy of The Beatles and just what a popular tourist attraction this will turn out to be.”

The idea for the statue came from Chris Butler, Managing Director of Castle Fine Art Foundry Ltd who was inspired when walking through Liverpool ONE and saw the huge image of the band outside HMV.

That image was of the band in London, so he found pictures taken of the Beatles at the Pier Head in 1963 and adapted them accordingly. The statues reflect the attire from that famous Liverpool waterfront photo shoot.

Chris said: “In the middle of the sparkling concrete, reflective metal and polished stone were the city’s most famous sons, and their colossal presence showcased Liverpool’s love for The Beatles.

“This is a statue that needs no title, no explanation, no instruments, no gimmicks. It’s a monument to a moment and the moment started in Liverpool.

“There’s a real joy in knowing that this idea has come to fruition thanks to The Cavern Club. Together we present, to all the people, with love, our Beatles.”

It is cast in resin and clay, by sculptor Andy Edwards, who meticulously researched the piece in order to perfectly capture the images and spirit of Paul, John, George and Ringo.

Andy said: “I can remember walking around the waterfront with the original sketch models and everybody wanted to talk to us – everybody has a Beatles story. Our image of them seems to bring past present and future together, like a time machine.

“I think the statue will quickly become a place of ritual. It will be a place to come together, have a think, meditate and play.”

The statue is unveiled as an in-depth report into the current Beatles offer and its value in monetary terms reaches its final stages. Compiled by the University of Liverpool and Liverpool John Moores University, the findings are due to be released in the New Year.