Your Are Here:  Home Cavern News John and Paul… “It Was Fete” 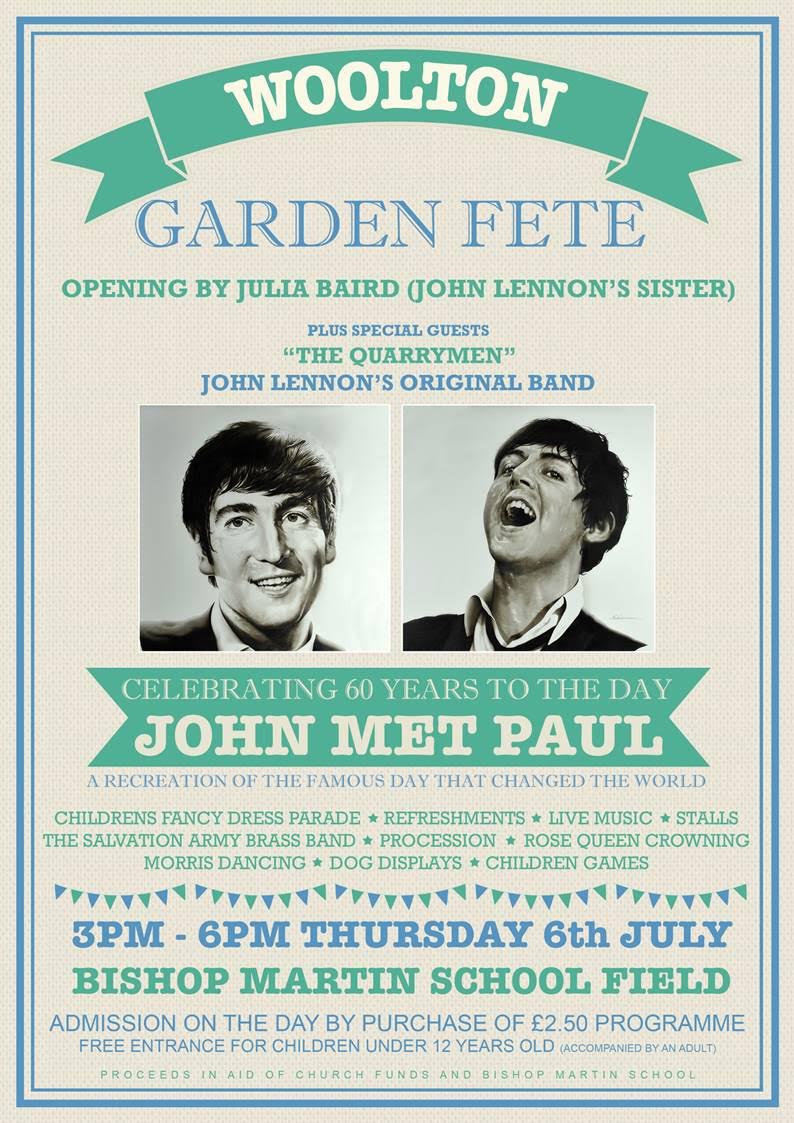 John and Paul… “It Was Fete”

It was a sunny day on July 6 1957 when the Quarrymen played at Woolton Church Fete for the first time.

And the sunshine shone again – albeit with the threat of a few drops of teatime rain – when the band returned to play at the same event again last week, 60 years after their first appearance on the village’s church field.

More than 2,000 people flocked to Woolton to mark the most important date in Beatle history, the day when teenagers John Lennon and Paul McCartney met for the first time.

And The Day John Met Paul, organised by the Cavern in collaboration with St Peter’s Church and Bishop Martin School, not only celebrated one of the key events in 20th century music history but also raised thousands of pounds for school funds into the bargain. The Quarrymen pose for pictures inside St. Peter’s Church Hall

Beatles songs rang out from the bell tower of St Peter’s Church – part of wider events planned by the village – as Fab Four fans gathered to catch a glimpse of the original Quarrymen, who took to the back of a bunting-decked float to recreate a little of the original carnival parade.

The lorry was driven by Doug Chadwick who, as a teenager, was also behind the wheel of the Quarrymen float all those years ago.

Colin Hanton, Rod Davis and Len Garry, who were on stage with John Lennon at Woolton in 1957, were joined by fellow Quarrymen Chas Newby and John Duff Lowe, and the group’s original manager Nigel Walley, and played acoustic Skiffle numbers – complete with washboard and tea chest bass –  from the back of the float, to the delight of the crowds who had lined the route of the procession. The Quarrymen get ready to perform on the back of a lorry just like they did 60 years ago.

Large queues built up outside the school site ahead of the 3pm official opening of the fete, carried out by John Lennon’s younger sisters Julia and Jacqui and cousin David. All three were there as children in 1957 to enjoy the day and watch the Quarrymen play. The village Rose Queen and Rose King were crowned and Julia Baird and sister Jacqui judged the children’s fancy dress competition, before the Salvation Army Band struck up, providing a traditional musical backdrop to the event, which also featured a coconut shy, tombola and raffle, cake tent and barbecue as well as plenty of musical memorabilia. The Salvation Army Band also kicked off a programme of live music which entertained fete-goers throughout an afternoon which saw many faces who had been at the 1957 event return to enjoy the fun, six decades on, alongside youngsters from Bishop Martin School.

Jonny Storm and the T-cups played a set of 1950s classics, before the Quarrymen took to the stage with songs they had performed as teenagers 60 years ago, including Lonnie Donegan’s Rock Island Line which helped trigger the Skiffle craze in England.

The Coburn Brothers brought the fete to a close with a series of Lennon and McCartney’s iconic numbers.