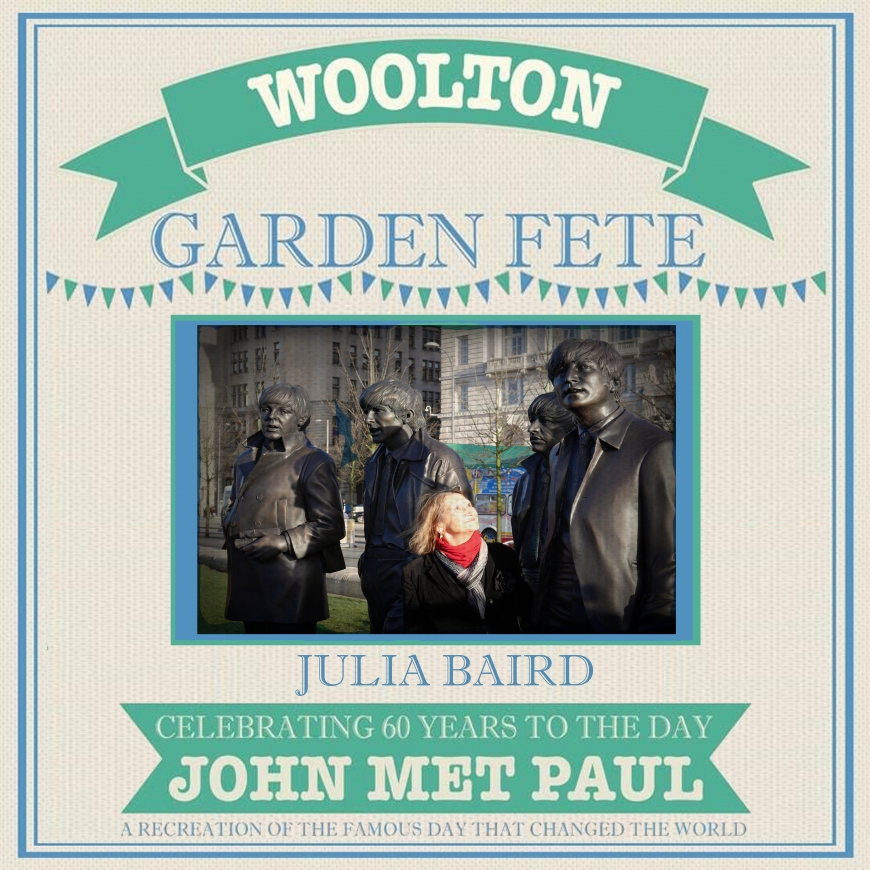 Julia Baird, John Lennon’s Sister, looks back on the day John met Paul ahead of our 60th Anniversary Celebration.

Julia Baird was 10 in July 1957, and her younger sister Jackie was seven, when they were taken to St Peter’s Church by their mum Julia to have fun at the fete and see their brother’s band – the Quarrymen – play.

She will be judging the children’s fancy dress competition at this year’s 60th anniversary event.

What do you remember about the church fete?

I remember the candyfloss and the coconut shy. And then there were all the police dogs, from the station at Mather Avenue, jumping through firey hoops. We had them at school, and at all the summer fetes the dogs and police horses came to them as well.

It was an outing, Woolton Church Fete day. The Rose Queen would have taken months to choose, and then the dresses took months to make.

We all went along to the Parry’s house, a cottage in Woolton. And then all of us walked along to the village. Harry, Nancy, Julia, Jackie, David and Michael.

We walked to Quarry Street, which is where the lorries were going to be set up. They were cleaned up coal lorries, which were all decorated with paper flowers, and the Rose Queen was there.

In June the city was 750 years old, and my mum took me to Rosebery Street. Jackie and I were pulled up on to the back of the lorry there (that the Quarrymen were playing on) and it was filthy with coal.

What can you tell us about the Woolton carnival procession?

The floats were all around the corner in Quarry Street itself. They started to go round and they (the Quarrymen) were playing. The lorry was moving really slowly, and they were swaying, and in the end John sat down on the tailgate.

Jackie and I were immediately there, pulling his legs to try and get him off the lorry!

We walked up with my aunts and cousins to turn left in to Church Road, keeping pace with the lorry. I remember it was really exciting. And then we went up to the field. We rushed off then. There were other family members there, and we were all off, looking around and seeing what was available.

When did the Quarrymen get there and play?

It was a long time.

We were across as soon as it started. Before that we were going round doing fete things.

I remember listening for them to start.

John was wearing the ‘real genuine’ US cowboy T-shirt my mum had bought. She bought four in the market and John practically lived in his.

How many people were watching them perform?

There were people dotted about. They were standing round talking, clapping, like nice people do at the end of a song.

My mum was very supportive but she wasn’t dancing around, she’d have been talking to her sisters.

After that we walked back to Allerton, all the children.

What did the Quarrymen think about the reaction?

They were thrilled to bits, they were happy about it. I suppose it was a bit of a rehearsal for the evening. This will be followed in the evening by the Grand Dance at  7:30pm. Tickets are £20 are now SOLD OUT!