Your Are Here:  Home Cavern News Mary Wilson of the Supremes Gears up for Gig at the Cavern 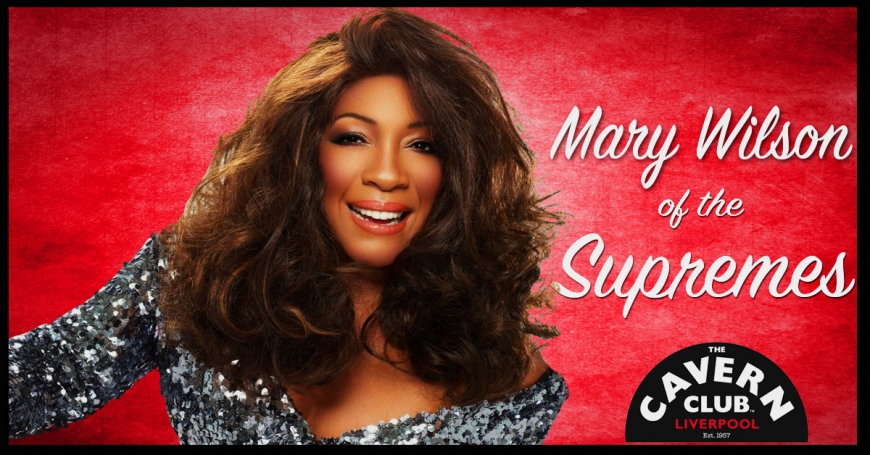 Back in the late 1950s, three teenage friends from Detroit loved to sing together – but they never dreamed they would one day become global superstars.

The trio were Diana Ross, Florence Ballard and Mary Wilson. And within a few years they would become The Supremes, the girl group which helped change the face of popular music and sold a cool 60 million records into the bargain.

Five decades after the singers had their first hit When the Lovelight Starts Shining Through his Eyes, the longest-serving Supreme of the original three – Mary Wilson – is heading for Liverpool to perform at another legendary name from the era, the Cavern Club.

The 73-year-old will appear in the city days before she takes part in a special charity concert evening for the Royal Variety at London’s Palladium.

The Supremes started life as The Primettes, in which Wilson, Ross and Ballard sang alongside a fourth friend, Betty McGlown.

“We were only 13-years-old, and really were only having fun. It was more of a hobby,” Mary reveals. “It wasn’t until we turned 16 that I started thinking about the future.

“It was then that I knew I wanted to sing for the rest of my life. There was nothing else on my mind, or for the group, than making hit records.

“As a teenager, I don’t think growing up, or even thinking about 50 years later ever entered my mind. All I was thinking about was that moment in time, and that it would never end.

“Here we are some 50 years later, and it seems like time has stood still, even though my age hasn’t!”

In 1961, the ambitious teens signed to Motown, changed their name to The Supremes and saw the departure of McGlown who left to get married.

And not long after the remaining trio had their first hit in 1963 they also chalked up their first number one as well – the Holland-Dozier-Holland song Where Did Our Love Go, the first of five successive chart-toppers including Baby Love, which was also a number one in the UK.

Incidentally, in 1964 the group’s third album was titled A Bit of Liverpool, aimed at an America in the grip of the British invasion, and on which they sang covers of songs either written or recorded by the Beatles and also Gerry and the Pacemakers.

With so many hits to her name over the years, does Mary have any one most memorable musical moment?

“I feel very fortunate to say that I have many memorable moments of sheer joy. I call them Miracles!” she smiles.

“Having my first child was one of the miracles that I have had as a woman. It still out shines all the other miracles in my life.

“However, musically speaking, meeting Florence, Diane and the other two Primette members was where I felt my first musical miracle, which has lasted all my life.

“Another was the Command performance at the Palladium in 1968 where we met the Queen Mother. After all, we were three little Black girls from the Brewster housing project who grew up in poverty, now meeting royalty.”

She may only be that little girl from the Brewster housing project, but apart from selling all those millions of records, Mary has also been a vocal supporter of musicians’ rights, being one of a group of people who lobbied on Capitol Hill for the rights of the artist.

And she has some pertinent to say about the main challenges currently facing the music industry.

“Identity theft is a big issue that’s been the topic of many discussions,” she says. “However, in the music industry this is a subject that has been overlooked.

“The ‘truth in music’ legislation is a bill that has been passed in over 30 states here in the US. It states that if the group that’s doing the concert did not have at least one remember who recorded the songs, then the audience could request their money back.

“There has been a long history of artists being cheated out of royalties, and having to sign away rights to record companies.”

And she says one of the most pressing issues that needs addressing is downloading music from the Internet.

Mary is the longest-serving of the Supremes, who were inducted in to the Rock and Roll Hall of Fame in 1988, 25 years after their first hit record.

Another band that shares a place in the pantheon of music icons recognized by the Cleveland, Ohio attraction is a certain fab four lads from Liverpool, who were inducted in the same year as the girls from Detroit.

Now Mary is set to make an appearance at the Beatles’ old stomping ground, the Cavern, later this month ahead of another visit to the London Palladium.

“Both cities have such strong musical history that it will be a thrill to be in the city that was the birthplace of the Beatles – and perhaps drink the water!”

Mary Wilson of the Supremes appears at the Cavern Club on June 21. Tickets are £30 from the website www.cavernclub.org