Your Are Here:  Home Cavern News The Eagles Have landed 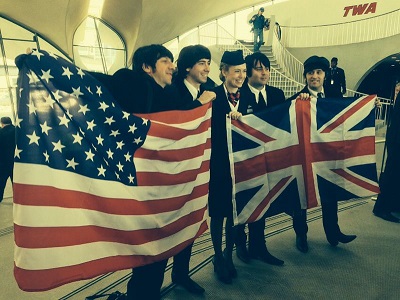 The Eagles Have landed So they made it! The Liverpool party which included our Cavern Club Beatles, John Lennon’s sister Julia, The Lord Mayor Gary Millar and deputy mayor Wendy Simon touched down at JFK International airport in time to join in America’s big 50th anniversary celebrations.Treated like royalty the group were whisked through security to be the main attraction at the airport’s official 50th anniversary event.

U.S. fans joined together at TWA terminal to remember 50 years ago when the Beatles took the same journey. People who were there back in 1964 reminisced about events that occurred on that historic day. Fans and the world’s media were entertained with the Beatles music and of course The Cavern Club Beatles and Julia quickly had to get used to being ‘papped’ from every angle! A plaque to commemorate the 7th Feb 1964 was unveiled during the celebrations.

Catch up with some great new pics of their arrival.

Shortly afterwards the group were taken by stretch limo to the Ed Sullivan Theatre, where the Beatles had made their U.S. television debut back in 1964. The Caven Club Beatles were honoured to walk on the same stage as the Fab Four. Watch a video of the lads outside the Ed Sullivan theatre

The band then caused more mayhem as they checked into the Plaza hotel (the very same place that The Beatles stayed at)…quite surreal to say the least!

There’s no rest for the wicked however as the tour marches on in cold New York as the lads have a heavy schedule filming in Central Park followed by a surprise acoustic performance at Strawberry Fields. Later this evening (New York time) the guys will head to a star studded tribute at the Town Hall Theatre on Broadway where The Cavern Club Beatles will perform the same set that the Beatles played on that famous Ed Sullivan show appearance. The Lord Mayor of Liverpool  and Julia Baird will also take part in this special event. So another busy day in the Big Apple…catch more on all of this tomorrow.